– 2018 saw reasonable global economic and profit growth and still low interest rates but it has been a rough year for investors with worries about the Fed, trade wars and global growth causing volatility and poor returns.

– 2019 is unlikely to see the plunge into recession many fear with growth likely to stabilise supporting profit growth, the Fed is likely to undertake a pause in rate hikes and global monetary policy is likely to remain easy. The RBA is expected to cut interest rates.

– Against this backdrop, share market volatility will likely remain high but markets should start to improve through the year.

– The main things to keep an eye on are: the risks around the Fed, US/China tensions, global growth, Chinese growth and the property price downturn in Australia.

After the relatively low volatility and solid returns of 2017, the past year has seen almost the complete opposite with high volatility and poor returns. It started strongly in January but started to get messy from February. At a big picture level things were fine: global growth looks to have held solid at around 3.7%, inflation rose in the US but only to target and it remained low elsewhere, the Fed raised interest rates but rates generally remain low and profits rose solidly. But it was the risks below the surface that came together to give a rough ride. There were five big negatives:

Australia saw growth around trend and made it through 27 years without a recession, as infrastructure spending, improving business investment and strong exports helped support growth and this in turn drove strong employment growth, a fall in unemployment and the Federal budget closer to a surplus. Against this though credit conditions tightened significantly with the Royal Commission adding to regulatory pressure on the banks, house prices fell, wages growth edged up but remained weak and inflation remained below target, all of which saw the RBA leave rates on hold.

Overall this drove a volatile and messy investment environment.

2019 – better, but volatility to remain high

In a big picture sense, the global economy looks to be going through a mini slowdown like we saw around 2011-12 and 2015-16. This is most evident in business conditions indicators that have slowed but remain okay. See the next chart. 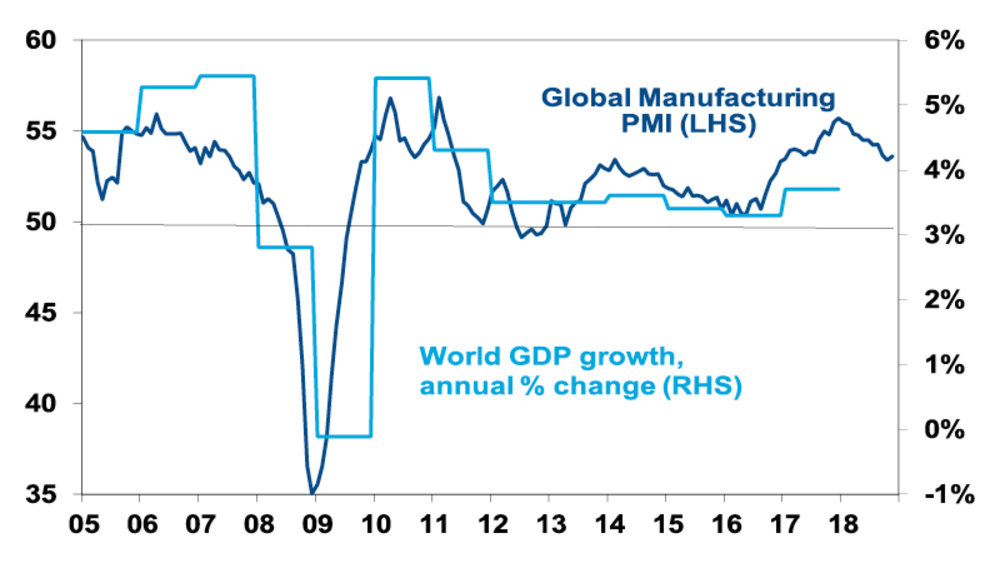 Like then, this has not been good for listed risk assets like shares but it’s unlikely to be signalling the start of a recession, baring a major external shock. Monetary conditions have tightened globally but they are far from tight unlike prior to the GFC and the normal excesses in the form of high inflation, rapid growth in debt or excessive investment that precede recessions in the US or globally are absent. In fact, to the extent that the softening in growth now underway takes pressure off inflation and results in easier monetary conditions than would otherwise have been the case it’s likely to extend the cycle, ie delay the next recession. The slump in oil prices is a key example of this in that it will take some pressure off inflation and provide a boost to consumer spending. Against this background the key global themes for the year ahead are likely to be:

In Australia, strength in infrastructure spending, business investment and export values will help keep the economy growing but it’s likely to be constrained to around 2.5-3% by the housing downturn and a negative wealth effect on consumer spending from falling house prices. This in turn will keep wages growth slow and inflation below target for longer. Against this backdrop the RBA is expected to cut the official cash rate to 1% with two cuts in the second half of 2019.

After the turmoil of 2018, the outlook for 2019 comes with greater than normal uncertainty. The main things to keep an eye on in 2019 are as follows:

Important note: While every care has been taken in the preparation of this document, AMP Capital Investors Limited (ABN 59 001 777 591, AFSL 232497) and AMP Capital Funds Management Limited (ABN 15 159 557 721, AFSL 426455) make no representations or warranties as to the accuracy or completeness of any statement in it including, without limitation, any forecasts. Past performance is not a reliable indicator of future performance. This document has been prepared for the purpose of providing general information, without taking account of any particular investor’s objectives, financial situation or needs. An investor should, before making any investment decisions, consider the appropriateness of the information in this document, and seek professional advice, having regard to the investor’s objectives, financial situation and needs. This document is solely for the use of the party to whom it is provided.